St Nectarios: Who is He? What Has He Done For Us? 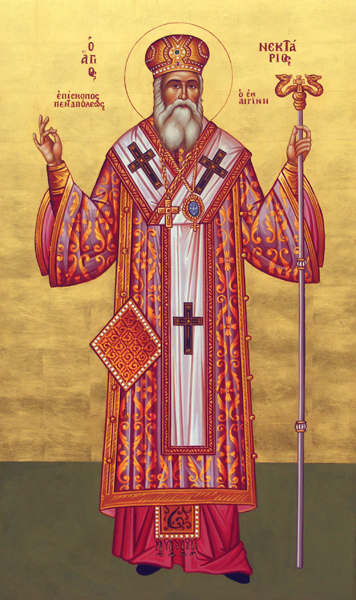 St. Nectarios was born in 1846 in Selvyria, Thrace. From his youth he felt the calling to be a priest, and was tonsured a monk while pursuing theological studies in Athens. He distinguished himself as a pastoral figure, a loving and caring teacher as Dean of Risareios Seminary, a prolific theologian in writing more than 60 books in various fields, a saintly hierarch as Bishop of Pentapolis, Alexandria, and above all, a truly humble and pious man, setting a unique example of unselfish humility, Godly poverty, prudent love, and unfailing endurance.

Fulfilling a life-long hope, St. Nectarios started a convent on the Island of Aegina where he had heard that there were monasteries and churches that were in disuse. There he established a convent in a church formerly dedicated to the Most Holy Trinity. His first monastic was a blind nun named Xenia whom St. Nectarios made the superior of the first community. It was soon evident that this simple monastic Bishop was truly a gifted man and many people sought him out for spiritual direction. In his lifetime, and even more so after his death, St. Nectarios became a lighthouse of God's grace shining throughout the world, steering many through the dark storms we so often encounter in this life and leading many to the safe shores of repentance and salvation. What made him best known in Greece and throughout the world is that he proved to be a clear vessel of the grace of God Who granted him the gift of working miracles even before his repose onto eternal life.

On September 20, 1920, the nun Euphemia brought St. Nectarios to the Aretaieion Hospital of Athens, a state hospital for the poor. The doctors diagnosed St. Nectarios with a terminal disease and for two months this saintly hierarch lived in the midst of terrible pains. On the evening of November 8, 1920, St. Nectarios fell asleep in the Lord at the age of seventy-four. The day he reposed, the whole hospital was filled with a sweet fragrance. For some days afterward, the hospital could not use the room where St. Nectarios lay because of the strong fragrance. This room is now a chapel dedicated to the Saint.

The body of St. Nectarios was taken to Piraeus and kept in the Church of the Holy Trinity while a small, wooden coffin was prepared for him. From there St. Nectarios was taken to Aegina where he was given a simple burial at the Convent of the Holy Trinity. Some years later, as is the custom in Greece, his grave was opened in order to remove the relics.

When the grave was opened, the Saint was found to be whole, uncorrupt, and issuing forth a strong yet sweet fragrance. Not even his vestments had changed in any way. It was just as if he had fallen asleep and been buried that very day. His monastery in Aegina is one of the most renowned shrines in Greece to this day.

While there are hundreds of saints whose sanctity has been declared over the centuries, there are few who enjoy universal veneration and popularity as intense as the veneration of St. Nectarios has become. Although he was of Greek descent, he is not only a saint for the Greek people, and neither merely adopted by the Slavs, nor any one national people. He is for us -- all of us.

Many wonderful and faith-filled gifts have been given through the prayer of intercession to St. Nectarios through the years. There are several of our faithful who have testified privately and publicly of the miraculous intercessions of St. Nectarios in many ways and forms. The power of intercession through faith and prayer is great. It is a power which is humanly unexplainable. There is no scientific explanation for the powerful melding of a saint's relics, holy oil and prayer. What can we say and how can we explain that power better than what the Psalmist has already explained for us? Hear Psalm 103:

". . .The Lord is full of compassion and mercy, long-suffering and of great goodness". This is how the Lord is kind and compassionate and merciful to us - we who suffer from all kinds of diseases and maladies. He sends us relief from these burdens through His holy saints, IF we have faith, IF we believe. Let us, then, with one mind, one heart, and one purpose sing together in prayerful Supplication to Saint Nectarios: 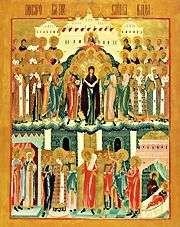 Saturday of the 6th Week

Anastasia the Martyr of Rome; Our Righteous Father Abramius